The National Football League has become one of America’s most influential and most sought out forms of entertainment in America. Fans from all over the country give unequivocal support for their preferred teams, creating a fun, competitive pasttime for 17 Sundays in the fall.

For the past seven years, the NFL has displayed an initiative to give back to its long-loyal fan base, particularly it’s female one, by raising awareness for breast cancer. Teaming up with the American Cancer Society, the NFL has painted its stadiums pink, donned pink gloves and towels, and painted pink ribbons on their fields in order to raise awareness to the cause. With its campaign “A Crucial Catch” The NFL stresses the importance of annual screenings for breast cancer. An unlikely partner to the ACS, though not an unwelcome one, it aims to teach everything about breast cancer to its audience, male and female. Bringing attention to its somewhat neglected female fan-base, the NFL has decided to break all stereotypes and actively involve each member of the female crowd through this, and other, campaigns.

But, does it actually help find a cure for cancer? Not really.

Over the past seven years of the partnership between the NFL and ACS not one penny has gone to breast cancer research. Not a single piece one from the shoes, penalty flags, towels or t-shirts sold.

What happens is the NFL donates proceeds from its pink campaign to the ACS, which is dedicated solely to increasing awareness, education and screenings for women over 40.

“The money that we receive from NFL has nothing to do with our research program,” ACS spokeswoman Tara Peters told VICE Sports. The donations all go to the society’s CHANGE program, which awards grands to facilities near an NFL city purely for education. And while that may sound well and good for many NFL fans clamoring for a pink Denver Broncos jersey it turns out the problem gets worse.

“Screening doesn’t save lives and screening mammography … is different from diagnostic mammography,” Karuna Jagger, head of the Think Before You Pink program said. “The NFL has no business providing medical advice to women that is outdated, unproven, and misguided.”

Recent research has shown that screening mammography, the ones the NFL is promoting in their October mission, does not result in reduced breast cancer mortality rates for women over 40. Instead, Breast Cancer Action, the group behind Think Before You Pink, urges a self-detection system until a breakthrough in early detection and breast cancer treatment comes through. By examining your own body, the risk of false positives and costs associated with mammography examinations can be delayed until an unusual lump or other symptom appears. That, the organization said, is when mammography can be a useful tool.

Currently, the NFL’s program has all of the proceeds from their pink campaign going to the ACS for advocacy. But that 100 percent is closer to eight percent of the money sent to the society while large chunks are distributed back to the suppliers (and the NFL, which keeps its own licensing fees). About $1.1 million annually has gone to the American Cancer Society. All of it to spreading information that does not lead to fewer deaths from breast cancer and zero of it goes to breast cancer research to actually try to prevent breast cancer from occurring in the first place.

That doesn’t mean the entire program has gone for naught. Lisa Soulier of Lexington, Kentucky, credited the increased awareness brought upon by the NFL and ACS for helping her survive cancer at age 40.

“It’s because of this early mammogram that I’m able to enjoy time with my children and my family,” she said. With over 10,000 women screened for breast cancer, the NFL still says it will not back out of raising awareness for breast cancer. It is one of the most tangible ways of providing its league values to its female fans: a clear notion spelling out that NFL truly does want to increase its female outreach.

The NFL has decided to change paradigms by attending to its female crowd more than it’s male one in recent years. With its hiring of Sarah Thomas as its first female referee, and Jen Welter as coach for the Arizona Cardinals, the NFL only looks to increasing these numbers in the future by continuing its efforts, whether admirable or just to increase its bottom line.

Week 3 Picks for the NFL

The All-Star Games No One Wants To Watch

NFL Fines DeAngelo Williams For Raising Cancer Awareness On His Own 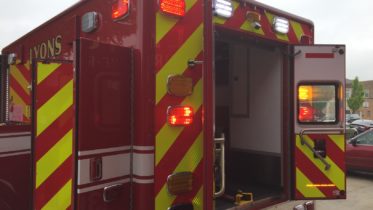 This post has already been read 557 times!Local writer documents history of EMS services Writer, celebrated investigator and Reavis High school graduate Paul Ciolino has penned a new book that documents the creation of the public paramedic system, EMS, which has saved countless lives since it was implemented in 1972 Originally published in the Des Plaines Valley News, Southwest News-Herald, The Regional News and the…

SiriusXM a leader in political discussion

Can we ban hate campaign Ads next time?